The City of Mattoon has several parks with playgrounds and several sports complexes. Full details on each appear below. Read more and then please go and enjoy the amenities each has to offer. Have fun!

Located in the southeast part of Mattoon at 800 South 14th Street, Lawson Park was opened in 1923. The land was given to the City by Mrs. Jennie Pepper Lawson. There are two entrances to this park. One is just off of Marshall Avenue on South 13th Street, and the other is on South 14th Street at Walnut Avenue.

New playground equipment was installed in the fall of 2011, thanks to the Kiwanis Club of Mattoon.

Other tournaments include the Cal Ripken 12-year-old World Series and the 2004 Babe Ruth Softball 12U World Series. The 2000 and the 2002 World Series were both televised to homes all over the world by the Fox Sports Network.

Lawson is also home to the YMCA Soccer league in the fall and the week-long British Soccer camp where each child is coached by a member of the Challenger’s team. Coaches are flown to all areas of the USA to help children from ages 3 to 14. Contact the Mattoon Area Family YMCA for more information. 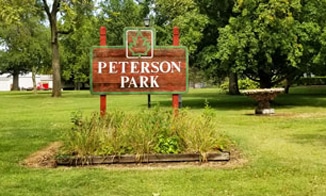 Located on the northeast side of Mattoon at 500 Broadway Avenue, Peterson Park is just one block north of Illinois Route 16, with two entrances:  one at 5th Street and one at 3rd Street. Peterson Park is the City of Mattoon’s largest park.

The land for Peterson Park was given to the City by Judge Abner M. Peterson in 1890 and was annexed into the City in 1903. Extensive improvements where done in 1907. In 1912, the addition of the baseball diamond and grandstand where built, which led to the organization of a city baseball league.

On June 4, 1968 the ball field was renamed to “Grimes Field,” after Bill Grimes, and was the home to the 1969 Babe Ruth World Series for 15-year-olds. In 1974, it hosted the Tournament of Champions for 16-18-year-olds. Over the years, with continued help of great volunteer organizations, baseball continued to grow and numerous tournaments such as the Babe Ruth Ohio Valley Regional, American Legion, State and Regional, have all been held at Grimes Field.

Grimes Field is geared towards Babe Ruth 13-15-year-olds, American Legion Jr. and Sr. baseball leagues, has a covered bleacher seating capacity of nearly 3,000. Anyone interested in posting advertising signs at Grimes Field can call the Park & Recreation office at 217-234-3611.

In the spring of 2007, the City began asphalting the roads in the park and they were completed May 18th, just in time for summer, making this park popular to walk around. One lap around the inside of the road is approximately 0.31 miles.

The Peterson House, original home to the Peterson Family, is still on the property. It is used during the annual Bagelfest as a temporary headquarters for employees and volunteers from the Tourism & Arts Department.

Peterson Park has a baseball field, a playground, a pavilion, the Demars Center, the Rotary Band Shell, restrooms,  and picnic areas scattered throughout the park.

The Pavilion at Peterson Park has 3 sections:  an east, center, and west. Electricity is available in each space by the counters.

The Demars Center is located in the back of the park (on the north side). It is a heated and air conditioned building with a full kitchen.

The Rotary Band Shell is located in between the Pavilion and the Demars Center and has been home to concerts, weddings, fundraisers, and more.

Peterson Park is the home to Mattoon’s Tourism & Arts events. Bagelfest, which is held annually in July, originally started in 1986 downtown on Broadway Avenue and was moved to Peterson Park in 2000. Holiday Lightworks display runs from the weekend prior to Thanksgiving through Christmas. This lightworks display is the largest in the area and attracts thousands of visitors each year.

Located in the southwest part of Mattoon at 28th Street and Marion Avenue, Little Kinzel Park has a playground area, basketball court, and an open field for youth soccer and football.

This park is nestled in the northwest part of Mattoon at North 30th Street and Garfield Avenue. Turn at north at North 29th Street, follow it to Garfield Avenue, turn left, and in 1.5 blocks you will arrive at the parking lot.

The City purchased this ground in November 1959 from Mr. & Mrs. Leon Vanlaningham to provide an additional park and playground facilities for the northwest part of the city. You will find playground equipment and an open field area for youth soccer, football, and baseball.

This park is located in the north central part of Mattoon at 12th Street and Champaign Avenue. Cunningham Park is the City of Mattoon’s oldest park having been established in 1858 and originally known as the Allison-Cunningham Park.

For many years this park was adjacent to Washington Elementary School, which was demolished in July 2004.

This park has a small playground area, a basketball court, and a big open area for play.

This complex has four fields with plenty of room for family and fans in the sunshade-covered bleachers with great views of the fields and the scoreboards. There is also a concession stand, press box, restrooms, pavilion with picnic tables, and plenty of parking.

Since its inception in 1984, Babe Ruth Softball has shown tremendous growth. It has become a premier softball program throughout the United States and Canada. It is designed for girls through the age of 18.

8 U Rookie League
8 U Rookie League is as close to regular softball as you can get, taking into consideration the age of the girls are eight-years-old and younger. The games consist of six innings, with a 1 hour 15 minute time limit. The 10-run rule is in effect after four complete innings. Pitching is from machines at a distance of 35 feet.

10U League
The games are 6 innings, with a 1 hour 15 minute time limit. The 10 Run Rule is in effect after four complete innings. Pitching is from a distance of 35 feet.

12U League
The games are 6 innings, with a 1 hour 15 minute time limit. The 10 Run Rule is in effect after four complete innings. Pitching is from a distance of 40 feet.

Mattoon Cobra Softball League is a traveling team that; promotes and operates fast pitch softball for girls ages 8 through 18; providing the youth with structure and fundamental learning experiences in competitive softball with a goal of attending a National Championship; develop and promote self-confidence and self-esteem in each player.

Mattoon Pride Softball League has a purpose and mission to give the girls instructional guidance and experience in playing fast pitch softball at the highest level of competition possible. Teams are traveling to tournaments in and out of the State and go where they must to develop girls who want to play in High school and prepare for college. Their emphasis is always on sportsmanship, character and fun, over winning.

The Girls Complex also hosts the YMCA Rocking Chair League on Monday nights June thru August. ALL Players must be 40 years of age except for 2 players and they must be 35 to 39 years of age.

Located at 10th Street and Richmond Avenue this complex is home to Mattoon Junior Baseball. This complex was organized around 1986 and the building was completed in 1993.

The complex has 4 lighted fields, with plenty of room for family and fans in the bleachers, scoreboards, concession stand, press box, restrooms, pavilion with picnic tables, plenty of parking and in 2011 a new storage building. The League continues to help upkeep and maintain the facility.

The original league known as the Jaycee League was formed in the late 1960’s and later became Mattoon Junior Baseball League.

This league is for boys baseball ages 7 to 8 Machine Pitch and ages 9 to 10 Kid Pitch.

Located at 6th & Shelby Ave., this is home to the Mattoon Breakers. Junior Football is for grades 5th thru 8th. Flag football on Tuesdays is also available for 3rd & 4th Grades.

The Mattoon Junior Football was organized in the 1960’s. In 2003 MJFL began the construction of their complex. 2004 was opening year for the building which houses a press box, concession and restrooms. MJFL has continued to make improvements to the complex by adding lighting, viewing platform, bleachers, sunshades, sound system, flag poles, fencing, landscaped sign and a storage building.

JFL hosts a summer Football camp by EIU Panther starting cornerback & safety Ray McElroy, who in 1995 went NFL Pro Football with the Indianapolis Colts for 4 years and then on to the Chicago Bears and Detroit Lions. Ray is currently the Chaplain for the Chicago Bears.

Rotating cities, at the beginning of the season a JFL holds the annual Jamboree where several teams come together to scrimmage with the offense going for 10 – 15 minutes followed by the defense. This allows the players used to a game situation and to let the coaching staff try players in positions and view their progress. Cities will have one team from each grade 5th thru 8th and each team there plays during the day on 4 different 40 yard fields. This event usually runs from 10am to 3:30pm.

This complex located at 3rd & Shelby is home to boys and girls Babe Ruth T-ball ages 4, 5, 6, or 7 years old by April 30th. This complex has 4 fields, with plenty of room for family and fans in the sun shade covered bleachers. It is fully equipped with a concession stand and restrooms.

T-ball usually has at least 30 teams, playing 6 weekends beginning in May. The last weekend will host an all stars game of the 7 years olds as they prep them for moving up to the next league.

Bike Path for Walking and Riding

The City of Mattoon has a bicycle and walking path beginning at 10th and Richmond following a former train track bed, It starts at the boy’s baseball complex and runs east all the way to the City of Charleston. As part of the OSLAD grant by the Illinois Department of natural Resources, the Bike Path was recently extended to loop all the way around the Roundhouse Complex from 10th St. to Logan and back. One complete pass around the complex is 1.6 miles.

This Facility is located at Logan and Shelby. It’s constructed of concrete, with ramps, steps, rails, etc and being used by numerous skateboarders and BMX bikes. The design was derived by the City’s staff and a group of skateboarders giving ideas and suggestions to Skate Park Designers. It was constructed as part of an OSLAD grant from the Illinois Department of Natural Resources. Grand opening was held October 10th, 2009 with skate board competitions. This is the only concrete skate park in the area so please help us maintain the area. It is open during daylight hours only at your own risk.

Recreational sports in Mattoon are managed by the individual leagues, independent of the City of Mattoon. The following are shortcuts to each league’s website where you can learn more.

If you experience a problem with any of the links above or have an update, click here to visit the Report-a-Problem page, scroll down and click the radio button next to the website option, and then complete the online form.